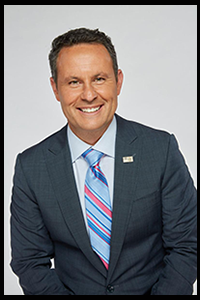 Brian Kilmeade is the co-host of Fox News Channel's  FOX & Friends alongside Steve Doocy and Ainsley Earhardt. Additionally, he serves as host of The Brian Kilmeade Show, a nationally syndicated three-hour radio program on FOXNews Radio. Kilmeade joined the network as a sports reporter in 1997.

Every weekday morning, FOX & Friends provides viewers with the latest on the current headlines in news,politics and entertainment.With recent interviews including President Donald Trump and Vice President Mike Pence, FOX & Friends is on track to have the highest rated year in history.

Prior to joining FNC, Kilmeade was a freelance reporter and anchor for NEWSPORT TV where he anchored ScoreboardCentral. He also served as a sports anchor and director at the independent station WLIG-TV in New York, an anchor/host for KHSL-TV (CBS 12) in Ontario, CA and a radio host on The Jim Brown Show on XTRA-AM, an all-sports radio network.Kilmeade began his career as a correspondent on Channel One, a daily national high school television news program.

Kilmeade is the author of several books, “Andrew Jackson and the Miracle of New Orleans:The Battle That Shaped America's Destiny” and New York Times bestseller’s“The Games Do Count: America's Best and Brightest on the Power of Sports,” “It's How You Play the Game: The Powerful Sports Moments that Taught Lasting Values to Americas Finest”and “George Washington’s Secret Six.”

He received a B.A.in Communications from Long Island University.