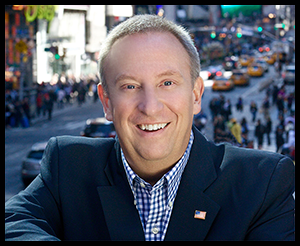 Mike Gallagher’s road to being one of the most-listened-to radio talk show host in the country (Talkers Magazine) began in 1978 as a 17-year-old high school senior in Dayton, Ohio. Mike talked his way into an on-air shift at WAVI-AM in his Ohio hometown and has been talking on the radio and television ever since. Mike’s broadcasting career has taken him from Dayton to Greenville, South Carolina where his ratings and revenue success led to his eventual promotion to station manager. He was also the host of the popular Tiger Tailgate Show on the Clemson Football Radio Network. From there, he became the afternoon drive-time leader in Albany, New York on upstate powerhouse WGY-AM.

From Albany, it was just a short drive south to the nation’s number one market, New York City, where Mike enjoyed a two year stint as morning drive host on WABC-AM, the nation’s most listened-to talk radio station. In 1998, The Mike Gallagher Show was launched nationally with 12 radio stations. Today, Talkers Magazine reports that he’s the 6th most-listened-to radio host in America with over 3.75 million weekly listeners in top ten markets like New York, Los Angeles, Dallas, Houston, and Philadelphia as well as cities all over the country, and is the 7th most recognized talk radio personality in America (The Benchmark Company). Mike has been featured in numerous magazines and newspapers including The New York Times, The Wall Street Journal, Time, and Forbes.

Besides his talk radio duties, Mike is equally comfortable in front of television cameras. He’s a FOX News Channel Contributor making frequent appearances on all of the FOX News Channel programs as well as occasionally guest hosting talk shows on the cable news giant. He added “author” to his resume with his first book, which became a New York Times Bestseller, Surrounded by Idiots — Fighting Liberal Lunacy in America, published by William Morrow, an imprint of Harper Collins. In September 2012, Simon and Schuster (Threshold) published Mike’s second book, 50 Things Liberals Love to Hate, a humorous, insightful romp about the many things about America liberals seem to hate.